Copelandia Cyanescens or Panaeolus Cyanescens are one of the members of Kingdom Fungi belonging to the genus panaeolus. The shroom spores possess the Tryptamine alkaloids, having the power to alter minds and so they are psychoactive compounds. They are also referred to as Hawaiian Species as they are originated from there. 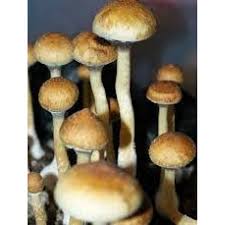 The small species with light colored head, long stem, and changing color from light brown to gray at maturity. They have a very strange characteristic of a bluing reaction. As there is any damage to the mushroom by any external means like human touch, squirrel bite, etc, it immediately turns blue as a result of oxidation. The potency of mushrooms is higher as long as they remain untouched. They must be picked up with extra care avoiding any harms to them so that the alkaloidal contents can be retained up to the most level in them to produce the therapeutic effect.

The Copelandia Cyanescens, like other mushrooms have Psylocin and Psylocibin as the active ingredients but with higher levels of the former than the Psylocibin. These psychoactive constituents result in increased creativity and hallucination thus taking the person away from the real world and let him feel relaxed and ecstatic for some time. The effects may vary from person to person depending upon the dosage and the environment in which the person is using them.

They are often eaten fresh, sometimes used by boiling them up till become black juice which is often mixed with brewed coffee. Unlike other mushrooms, they are rarely dried. They can also be consumed by mixing with orange juice or hot chocolate as per the taste of the user. The potency of the mushrooms remains higher when used fresh.

The common therapeutic uses of Copelandia Cyanescens cover the problems of headache and migraine. In high doses, they have the ability to disrupt the voluntary muscle control. Like other mushrooms, they must also be used with care to avoid any of the adverse effects.